Punching Pac-Man through a Space Echo

Niches can be cool. Especially when you’re the star of one. Even better when you dug it out from nothing all by yourself. Jan Gleichmar, aka Disrupt, label head of Jahtari.org, is the star of his own genre. He refines a bulky sub-bass sound with an oldschool 8-bit charm. He calls it simply: Digital Laptop Reggae.

Being a nerd can also be cool. Especially if you manage to produce something as catchy as what Disrupt came up with. His first netlabel release came out in May 2004 on the electronica label Phonocake.org from Dresden, Germany. It was melodious, hard to get out of your head and surprisingly successful. A separate netlabel platform was needed — a project Jan quickly baptized Jahtari.

The success and ease of these recordings lies in the clever but simple recipe that’s at the heart of most of Disrupt’s music.

At the age of 31 Jan has already experienced a big chunk of music culture. Travelling through gabba and drum-and-bass; over experimental to minimal techno he arrived at the happy island we call dub. On this journey he was influenced by more than classics loved in Jamaica. Inspiration came to him via the Berlin Basic Channel posse, Moritz von Oswaldt and Mark Ernestus, all of whom were a part of the Rhythm & Sound project. 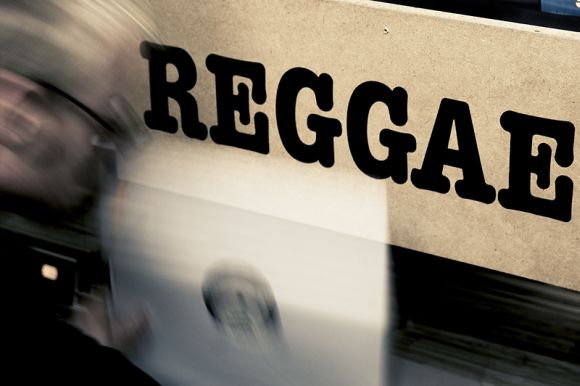 As Disrupt it was never Jan’s intention to just fall into old catagories. He wanted to find a way to let his beloved dub reggae develop. That’s how the Digital Laptop Reggae concept was born. Because after all, at the bottom of it there’s a singing notebook CPU and the music software Ableton Live. For the charming 8-bit feel of his trademark sound he threw in an extra bunch of rusty freeware plug-ins.

To all this, Jan combined the idea of the riddim. A riddim is like the musical open source code of dub. A hook line, if you will. It’s basically a short bass instrumental. Riddims have an original source but are used again and again by diverse artists to make new songs. Often enough riddims have been used and changed and mutated so much that the source or even the original composer can no longer be identified. It’s generally the rule that a riddim is not simply copied and used. As in hip hop and drum-and-bass, where a classic drum loop is rearranged into a new beat, Disrupt takes a riddim and after slicing and dicing, adds it to his own recipe. If he can’t find a riddim that fits, he simply cooks up his own. 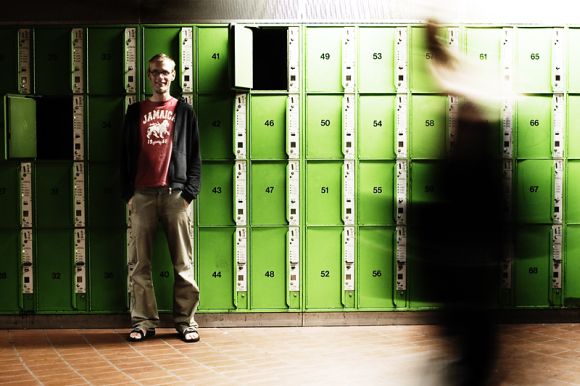 There’s a certain nostalgia listening to the sound of Disrupt — be it at Phonocake.org, iDEOLOGY.de or right there at Jahtari.org. The idea of recompiling retro-esque C64 game soundtracks is as simple as it is clever. For Jan it is more than a fondness for computer nostalgia though. It’s a deep musical appreciation of the composers of the 8-bit era, as their timeless songs have their very own sound and composition aesthetic. Jan rolls them up in massive bass and serves it up hot.

Sometime, of course, it’s got to be sampled. When Jan samples, he’s using game sounds as heard on his EP Drum Sounds. On one particular track he recorded a round of Space Invaders and built it into his beat. The melodies from games however, are not sampled. They’re ‘original’ copies made with the help of plug-ins. The boys from Jahtari aren’t just recycling old wrecks, but respectfully honouring the oldschool elders. Tune into their recent Monkey Island bootleg mix — a dub tribute that came wrapped up appropriately in a little online adventure game. 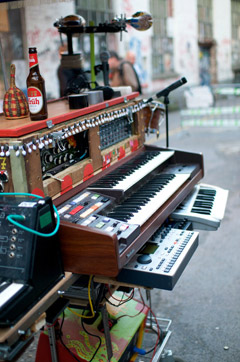 Jan has created something new with his Disrupt project. But that doesn’t mean that everyone releasing at Jahtari has to follow his lead. The primary directives are having fun, being your freaky self, and loving reggae and dub. One such freak also on Jahtari is Bo Marley.

Bo Marley is the Danes Max, Benjamin, Kristian und Theis. It’s also Jan’s hottest dish on the dub menu. In their fun tracks Bo Marley fuses dada-esque mutated German text with live instruments that the band has hunted down on their Space Echo trips. The result is original, catchy music, that you can’t get out of your head nor shake off your tapping feet.

As opposed to many other netaudio artists, Bo Marley is anything but a studio band. Together with Disrupt they have rocked such festivals as Fusion in Germany or Jazzjuice in Aarhus, Denmark. But Bo Marley are actually best known for their spontaneous live acts in public. They cruise over hill and dale in their jerry-built Space Echo analog electronic caravan and put on shows of Danish dub in dead-end streets and market squares. The accidental audience is stunned but also thrilled enough to stop and dance.

Disrupt and Bo Marley are a perfect match. Together they’ve also released a conventional CD, the first ever produced by Jahtari. Bo Marley vs. Disrupt is a concept album of small trilogies strung together from different Bo Marley tracks. Each trilogy begins with an old-fashioned ‘Tracker’ intro produced on an Amiga, followed by the actual Bo Marley track. Disrupt then rounds it all out by remixing it in his dub style. Very Jahtari.

The CD is available for a very friendly price and is sent by Jan himself. Included is your Bo Marley button of choice and good vibrations. The first physical release from Jahtari stays true to the netlabel concept though: you can listen to the whole album online.

Jahtari — where Jan does most of the label work besides releasing his own tracks — is an uplifting example of free music culture and how to release and market your own stuff. This simply wasn’t possible 15 years ago. That Jan is now invited to festivals and getting DJ gigs and that thousands are hearing and loving what he does, is only thanks to the internet and the netlabel idea of making and sharing music. “I could ever charge people for a faceless MP3 that would just end up on somebody’s hard drive. MP3 encoding costs pretty much nothing,” says Jan. But what about the creative value of his music? “Music will always be made, no matter what. The only question is, what will it cost to bring it to people.”

Ultimately, both MP3s and CDs seem a little inappropriate for the sound of Jahtari. “Reggae and dub are actually vinyl music,” says Jan. Unlike techno and other electronica that works fine in the MP3 format, dub in digital formats never really caught on. Vinyl and reggae culture simply grew up 100% together. No wonder Jan is constantly being asked when the Jahtari stuff is finally coming out on vinyl. Soon, he says. In the future real record releases are going to take priority over netlabel downloads. Not just because of demand but because of Jan’s utter love of it. “I want 7”s you can throw on the turntable. I want 10”s, 12”s on 45, LPs and covers for the shelf. I want people to stumble over Jahtari stuff in record shops and in 10 years to find it again at the flea market where, of course, it’ll carry a collector’s item price tag,” he says. “That’s how reggae works. And hopefully this will never change.” Full analog 8-bit rewind going fast forward!

In the meantime impatient DJs keep cutting their own Jahtari dubplates and a pipeline full of net releases by old and new Jahtari artists will rock your DSL. At least that’s the promise we extract from Jan before he waves goodbye and heads back into his 8-bit-chip-dub-digital-laptop-reggae wonderland. You know, where Pac-Man’s high on dope not pills and the Giana Sisters have dreads.